Designer of the Series Drogue, Don Jordan was a retired aeronautical engineer and spent his career in aircraft and engine development. He has been an enthusiastic sailor all his life and also was a licensed pilot flying small aircraft on wheels and floats. Don had no financial interest in the manufacture or sale of the drogue. He has provided his own funding for the development. He was greatly assisted by the U.S Coast Guard, who made their facilities available for testing and analysis and who tested the final configuration in breaking waves at the Motor Lifeboat School on the Columbia River bar. 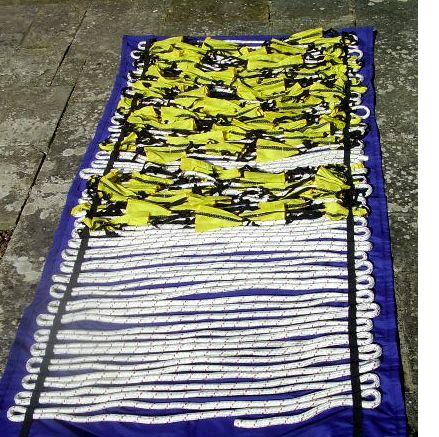 Jordan Series Drogue is a safety device designed to prevent the capsize and damage of both monohull and multihull sailing yachts and other vessels operating in the open ocean, in the event of a “worst case” breaking wave strike, as well as improving the motion of the boat in storm waves and to reduce drift.

The drogue consists of a number of small cones (from 100 to 200, 5 inch diameter cones attached) woven into a tapered line with a small weight at the end (15-25 lb. chain). The maximum design load and the number of cones is determined by the displacement of the boat.

The danger with the wind behind is pitchpoling, the Jordan Series Drogue will hold you back, stop you from surfing and prevent that happening. The yacht is still able to accelerate down the face of a wave, but the Drogue will slow it enough for the wave to pass through without dropping into a trough. The drag force is applied softly, allowing gentle acceleration until enough cones bite.

A dangerous breaking wave is formed by the interaction of two or more storm waves. This type of wave has a large mass of water at its crest moving at wave speed (20-30 knots). When a vessel lying ahull is struck by this moving mass of water, a very large force is developed. In a typical event the boat has been successfully riding out the storm for many hours, then, 10 seconds later it lies dismasted and damaged. It is the function of the Drogue to turn the stern into this moving mass of water and pull it safely through. In a dangerous breaking wave strike, moving water may sweep the cockpit and strike the companionway doors. This is unavoidable, and is a necessary corollary to saving the vessel.

The Series Drogue has been at sea for over 25 years. At least 2000 are carried all over the world. The drogue has been deployed through many storms including several hurricanes.

A Jordan Series Drogue can be a lifesaver: LINK